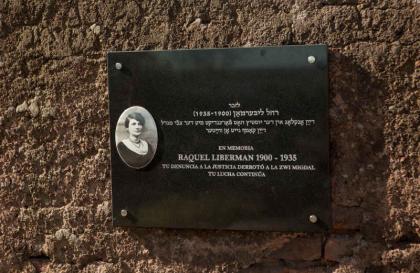 The Legacy of Raquel Liberman

By Jayson McNamara
For the Herald
@jaysonmcnamara

In Avellaneda, a city adjacent to Buenos Aires, 38-year-old artist Elianna Renner stands inside a jungle. Two-metre-high cacti poke at one another with their thorns, bodies of flesh entangled to form the perimeters of an impenetrable ecosystem born nearly a century ago. Neighbourhood rubbish thrown over the high dark brick wall, and some frightfully decrepit tombstones that bear little more than a Star of David fight for attention.

The irony of death is life itself. Insects swarm this forgotten plot inside the cemetery. Renner is joined by some film technicians who document her work and a small team of eager local gardeners. An open-air aviary abound with local bird species bear witness to the comings and goings, but in general to the abandonment, of this final resting place. The birds' sweet song echoes down the nearby streets of Avellaneda during siesta.

Renner recently learned, scouring through the archives, that Raquel Liberman, the woman who effectively put an end to prostitution in Argentina, is buried here. Buried here among the men who are believed to have entrapped her in an elaborate, international sex-trafficking ring known as Zwi Migdal.

Some of the headstones lay flat on the ground. Names have been scratched away and black-and-white photos stolen or scattered across the 1200 square metre space. Generic epitaphs in Spanish, Yiddish, Hebrew and Austrian German say little about the cemetery’s inhabitants. The dates of death allude to an era that ended, abruptly, in the early 1930s.

Renner, a Swiss artist based in Bremen Germany, and her team, joined occasionally by members of the broader Jewish community, work to restore the past and bring dignity back the hero buried among them, “La Polaca” as Liberman is popularly known.

Four years of research saw Renner journey from her base Bremen through Brazil, China, South Africa, India, Uruguay, the USA, and Brazil, to Buenos Aires.

It was from the port of Bremen where thousands of women bid their final goodbyes to Europe, tricked, forced into prostitution through poverty, or willingly.

“I was really surprised with Buenos Aires. It was the catalyst for my project,” Renner explains. “I became obsessed with removing this woman out of the curse of being considered impure.”

Rokhl Lea Liberman was born July 10, 1900 in Berdichev, modern-day Ukraine, beginning a life of hardships in the devastating poverty that tormented much of Eastern Europe at the turn of the 20th century.

In 1919, Liberman fled to Warsaw with her family to escape the pogrom, marrying Yaacov Ferber, with whom she would have two sons. When Yacoov immigrated to Argentina soon after their marriage in search of a better future for his family, Rokhl and the children followed. They joined him in Tapalqué, Buenos Aires province, in 1922.

However, their time spent as a family in distant provincial town was short lived. Months after Rokhl and her sons arrived, Yacoov died of tuberculosis. At 23, Rokhl left her children in the care of a married couple and travelled to the capital in search of work. It was in Buenos Aires where she is believed to have been deceived, enslaved and corrupted by the prostitution ring Zwi Migdal, beginning a new life as “Raquel."

“Raquel Liberman emerges in a context of weakness for Zwi Midgal. The Jewish community in Buenos Aires was vocally against it,” says Professor Abraham Lichtenbaum, the head of the Buenos Aires-based Fundación IWO.

A linguist, Prof. Lichtenbaum’s archival research indicates that the first public complaints about Zwi Migdal in Argentina’s Yiddish, Hebrew and Russian-language newspapers can be found in the late 1800s. However, such an active and public campaign against the organization would bear its consequences.

An eagerness on the part of anti-Semites to smear local Jews rendered Zwi Midgal a useful weapon in against the community. And this fed into a broader political context; in 1930 Dictator General José Félix Uriburu was ushered to power on the back of a wave of ultra-conservative Catholic nationalism. (Uriburu led the country’s first of six military coup d’états the last century).
Jewish theatres, community newspapers and synagogues were targeted in violent anti-Semitic attacks and in the non-Jewish press, Jews were labelled “undesirables” and the “enemy.” All the while, Hitler was on the rise in Germany and the Nazi press regularly pointed to prostitution in their attacks on the Jews.

In fact, in the same way the Argentine Jewish community’s very public battle and leadership against trafficking in women was used against them, in Europe, the work of civic leaders like Bertha Pappenheim, the head of the Jüdischer Frauenbund League of Jewish Women, could be seen quoted in publications like Der Stürmer.

Others, including the French, Spanish, Italians, said and did nothing, despite registries from the era indicating prostitution within those sectors of Argentine society far outnumbered any similar activity by Jews.

“One wonders if it was in the interest of the Jewish community to have so actively opposed Zwi Midgal instead of carrying out a more subtle boycott,” Lichtenbaum ponders.

The organization’s isolation from the local Jewish community saw them further formalize their own institutions in an effort to somehow maintain a connection to the Jewry. This has made tracking Zwi Migdal significantly easier for researchers when compared to other historic sex-trafficking rings.

Straw that broke the camel’s back

By the late 1920s, the general disapproval and offence caused by the Zwi Migdal’s commercial activities in prostitution (which was legal at the time) and sex trafficking culminated in a heightened campaign against the organization from within the Jewish population, both locally and abroad.

When Zwi Migdal --- whose patrons operated most of Buenos Aires’ Yiddish theatres at the time --- were bought out of the former the Ombú Theatre, located on Pasteur street (formerly Ombú street), the new owners prohibited “the entrance of impure ones”. It was the beginning of the end for Zwi Migdal.

Jewish organizations worldwide, rabbis and the Jewish press had made strong gains in their mission to discredit what they saw as immoral and corrupt gang of criminals. Groups like Ezra Nashim were established in Buenos AIres to send meeting parties to the port so as to impede sex-traffickers from luring new female arrivals, while in Europe, the German Committee Against the Trafficking of Women and the B’nai B’rith were actively campaigning against trafficking in women through the work of notable patron like Rabbi Leopold Rosenak of Bremen (1868-1923).

Liberman would be the straw that broke the camel’s back.

A hero is born

Elements of the Raquel Liberman story are shrouded in mystery. But a 2003 novel by Myrtha Schalom titled “La Polaca: Immigrants, ruffians and slaves in the early XX century” (Galerna) was able to salvage her legacy from the obscurity of a distant past by clarifying some of the assumptions that seem easily made about such a remarkable figure as a female Jewish migrant who, with the cards stacked against her, took down a powerful global sex-trafficking ring.

As the story goes, Liberman, with the aid of a friend, managed to save money which she hid from her captors, allowing her to “buy her freedom” and open an antiques shop. When Zwi Migdal caught on to Liberman’s plan, they made threats against her to prevent her example from encouraging other women. And through treachery Liberman was forced to return to the brothel for a second time.

In December 1929 she fled, filing a complaint with the police and then testifying before a judge.

“Raquel Liberman was a rebel and she was very intelligent,” Schalom tells the Herald. For instance, “she had the wit about her to declare in her criminal complaint (against Zwi Migdal) that she had ‘no children or family in the country.’ She wanted to protect her two small sons living in Tapalqué.”

“In this sense, I’m sure she struck a deal with the Inspector of Police” Julio Alsogaray who took up the case.

The courts acted quickly against the Zwi Migdal on September 27, 1930, ordering the capture of its 442 active members and effectively imprisoning 108 of them. Brothels were closed and, despite prostitution remaining legal until 1936, dozens of Jewish pimps and “madams” were deported.

The trial made it onto the front pages of the newspapers though little was said of Raquel Liberman.

“There was complicity between the Police, the municipality and the ruffians, who falsified documents saying she continued to work as a prostitute. But the brothel where she supposedly worked had been shut down,” Schalom explains.

“They were trying to discredit her, it was important other women didn’t fight back like she was.”

Rokhl Lea Libermen did not live to see the fruits of her work. She died April 9, 1935  and was buried in the Zwi Migdal cemetery under the name Raquel Ferber.

In many ways, Liberman and her sons were fortunate. Documents show that the widowed mother of two was filing papers to return to Poland, where, only a few years after her death, millions of Jews would fall victims to the Nazi genocide.

On a sunny winter’s day, members of the city’s Jewish community join Elianna Renne and guests in a private religious ceremony to commemorate Raquel Liberman.

“I have mixed feelings. It never seemed real,” Renner tells the Herald. “It has been so magical to clean a cemetery.

“You couldn’t enter it without a machete. When the gravestones started appearing it appeared like a sculptural park, where there was vandalism. It went from magic to sad, exposing the reality of this place,” she explains.

A fellow of the University of the Arts in Bremen, Renner’s “Tracking the Traffick” interdisciplinary project — the second of two that stemmed from her research into trafficking in women as part of the history of 19th and 20th century migration. The project involves workshops in cooperation with art schools and universities in which participants research and reconstruct the history of trafficking using different media.

Renner says she hopes to implement a similar program in Argentina.

“I think it’s important make Raquel Liberman’s story accessible for children, for instance, to sensibilize them about her story and what it signifies for the fight against violence against women.”

Through a partnership with the ACILBA (Comunidad Judeomarroqui Argentina), Renner was able to enter the cemetery and begin documenting the restoration of the small space where Raquel Liberman is buried.

The 38-year-old is an artist of great ambition. She says that it will take further work to determine the exact location in the cemetery of Liberman’s grave.

“I want to protect the cemetery as a park for remembrance and to build an organisation with educational goals,” she concludes. “Perhaps we could even consider renaming the cemetery after Raquel Liberman.”

The plaque bearing Liberman’s images watches over her burial site.

“Your struggle continues,” it reads.