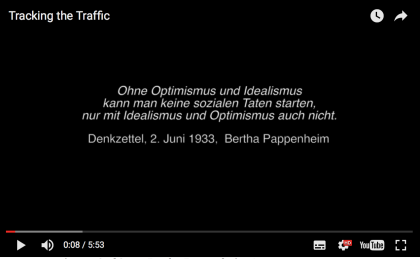 An app project at the interface of historical research, art, and society

The Jewish women’s rights campaigner and social activist Bertha Pappenheim is the focus of the sub-project at the Frankfurt site. This extraordinary woman arrived in Frankfurt in 1888, in the company of her mother, who was born and raised in the Hessian city’s large Jewish community. Bertha Pappenheim, who has gone down in history primarily as the patient Anna O. in Freud’s Studies on Hysteria, was in fact a complex and talented personality: she wrote stories for children as well as poems and plays, and translated political feminist writings and literary works from Yiddish into German. In 1904 she founded the Jewish Women’s Association of Germany in Frankfurt. Among other things, the Women’s Association opened a home in nearby Neu-Isenburg, to provide shelter and support to Jewish young women and girls who were illegitimate and/or menaced by trafficking and forced prostitution. The house was Bertha Pappenheim life’s work and she remained its director until her death in 1936. It is now an educational center and memorial site: the Bertha Pappenheim House.

The project aims to use diverse artistic media to focus public attention on historical research into the life and work of Bertha Pappenheim, the people of Frankfurt’s fight to end trafficking in women, and the flourishing local Jewish community around 1900. Interdisciplinary project seminars held with students of Jewish Studies, Art Education and Gender Studies at the Goethe University in Frankfurt culminated in the decision to develop a professional app (software application) that will provide users with a virtual tour of “Pappenheim’s Frankfurt.” During development of the app, the public space of the city serves as an open stage: art actions take place at various stations of the tour and are then documented on the app. The app thus visualizes history artistically and makes it tangible in public space through a medium that is accessible to a broad group of users with no previous knowledge of the subject. Exchange with Frankfurt’s educational, social and cultural institutions is being sought.

The project in Frankfurt is realized in close cooperation with Prof. Dr. Rebekka Voß, Professor of Jewish History at the Institute for Judaic Studies at the Goethe University in Frankfurt.

Further information about Bertha Pappenheim can be found here: http://gedenkbuch.neu-isenburg.de/en/